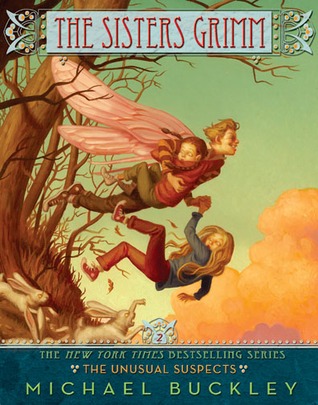 ISBN: 9780810993235
Pages: 292
Description: Needing a short filler novel and wanting something lighter, I turned back to Michael Buckley and his Sisters Grimm collection. The stories pull on some of the characters that have emerged in the Grimm fairytales and place two modern sisters in the middle of the narrative, tasked with uncovering various criminal acts. Sabrina and Daphne Grimm have been living with their grandmother for the better part of three weeks. While they have already uncovered a significant crime in Ferryport Landing, they have not been enrolled in school. With a threat to send them back to foster care in New York, the girls are marched to the local elementary school and placed in classes. While Daphne is sent to be taught by Ms. (Snow) White, Sabrina ends up with a crotchety old man who wants nothing more than to rid himself of the students in class. Sabrina has a rough first day of class and ends up staying after school, only to discover her teacher murdered and the classroom filled with odd webs. Working alongside their grandmother, the Sisters Grimm begin poking around and bring their friend/foe Puck along to offer his own insight. Drawing blanks, the sisters turn to the age-old clash of humans versus Everafters—the latter group being those who gained fame in a Grimm fairytale, but are not able to escape Ferryport Landing under any circumstances—which could account for this dastardly attack at the school. Sabrina forges ahead and sticks her neck out, not caring who she offends, to get to the bottom of it. What she discovers leaves everyone clueless and powerless to stop the plan that could wipe Ferryport Landing off the map once and for all. Full of wonderful fairytale characters and interesting banter, Buckley has fashioned this YA novel into something that readers of all ages can enjoy.

I read the series debut not long ago and enjoyed the premise that Buckley presents. While not my normal reading, the series has an entertaining aspect to it, particularly when I need something short to bridge me through. The premise of the Grimm sisters is interesting and while it is not explored completely here, there is a little character development to whet the appetite of the ever-curious reader. Sabrina is the sarcastic pre-teen who is not happy with the pat on the head, needing to know things and refusing to listen to authority. Her younger sister, Daphne, is still pie-eyed and wants to love everything, but the jaded views spewing from her sister leaves her beginning to question everyone. Peppering the narrative with fairytale characters, some of whom do not match their depiction in the stories we all know well, the reader is able to enjoy a flavourful story that keeps things interesting and provides twists at just the right spots. The story, a YA mystery, is decent and the plot paces itself effectively. There are moments I found myself more connected to the story than I might be with many adult thrillers that I regularly enjoy. Buckley has a way of mixing sarcasm with plot development to keep the narrative intriguing and allowing the reader the chance to chuckle between scenes. Lengthier chapters keeps the reader pushing forward, if only to reach the next benchmark before turning in for a while. Buckley has an entire collection of novels in this series that
I will have to discover before too long. A nice cliffhanger left me wanting to know a little more.

Kudos, Mr. Buckley, for another great addition to the series. I hope teens and adults alike discover this series and enjoy it as much as I have already.

Love/hate the review? An ever-growing collection of others appears at:
http://pecheyponderings.wordpress.com/